HER MAJESTY QUEEN ELIZABETH II ACTS UPON THE CALL OF DR. FLORIAN KONGOLI TO HONOR ENGINEERS AND SCIENTISTS

On May 30, 2011, Dr. Florian Kongoli wrote a letter to Her Majesty Queen Elizabeth II and the Duke and Duchess of Cambridge where among others he called upon her Majesty to play her role to properly honor engineers and scientists at least at the same level as other players in society are honored.

In this letter, among others, Dr. Florian Kongoli wrote:

However, it can be sadly noticed today generally in the world, that a great deal of acknowledgement as "stars" of our society is mostly given to politicians and artists. The scientists are mostly forgotten. Although we cannot imagine the world today without cell phones and the internet, the scientists that invented them are not at all known. This affects badly the aspirations of future generations. For example, in a recent poll in Italy, 95% of Italian teenagers wanted to be TV stars in the future. Science and engineering were not even on the list. If a similar poll would have been taken in UK the results would not have been very different. The same can be said for all developed countries where the number of science and engineering students is drastically falling. As Your Majesty may understand we are all very deficient today in acknowledging the scientists. I am just refraining myself from enumerating many examples in this direction.

As a scientist, while having the highest respect for politicians and artists, I would like for the profession of scientists to be more acknowledged in the world. This is because if we spell the real truth as it is there are primarily scientists and engineers who send the world ahead. They, in fact, make possible the "star" development even in politics and society: an example is the role of the internet in precipitating the revolutionary events in the Arab World. Another example is that a sustainable and clean world of tomorrow will mostly be achieved through new scientific developments before anything else...

The English Monarchy is well known in the world for its ability to bring positive change and adapt in itself. I guess that this gesture would bring to it another leading role in acknowledging the famous scientists of the world...

I very much hope to have the high honor and the privilege of Your Majesty's help in acknowledging the great work of scientists around the world.

(For the full copy of the letter please click here.)


Dr. Florian Kongoli received a reply, on June 15, 2011, which was private and confidential.

Her Majesty Queen Elizabeth II acted by establishing "The Queen Elizabeth Prize for Engineering", a £1m award biennial worldwide prize which in fact complements the Nobel Prize since it lacks a category in engineering.

"The Queen Elizabeth Prize for Engineering" was registered as Charity, 3.5 months after the letter of Dr. Kongoli, on September 13th, 2011 ( click here to see the official registration: http://opencharities.org/charities/1143790 )

The prize was officially launched 5.5 months later on November 17th, 2011 by Lord Browne, chairman of the Queen Elizabeth Prize Foundation, and endorsed by Prime Minister David Cameron and all parliamentary parties. More details on the announcement can be found on BBC News http://www.bbc.co.uk/news/science-environment-15770648.

It is very interesting to watch the speech of Prime Minister David Cameron embedded in the above link, especially the part in which he shares the same ideas and words written by Dr. Florian Kongoli in the letter directed to Her Majesty Queen Elizabeth II and the Duke and Duchess of Cambridge about 6 months earlier.

It is also very interesting to note that "The Queen Elizabeth Prize for Engineering" was officially launched merely 2 weeks before the start of the record-breaking Fray International Symposium dedicated to Cambridge University Professor Derek. J. Fray (www.flogen.org/conferences.php). It was this symposium, among others, that served as an impulse for Dr. Florian Kongoli to write to Her Majesty Queen Elizabeth II and the Duke and Duchess of Cambridge.

This was of course one of the successes that Dr. Florian Kongoli and the non-profitable organization FLOGEN STARS OUTREACH (www.flogen.org) reached in their mission to properly honor engineers and scientists.

Dr. Florian Kongoli published an article titled "Sustainability the Challenge of 21st Century - Reflections on the role of Science and Technology" at the SIPS2011, held in Cancun, Mexico. 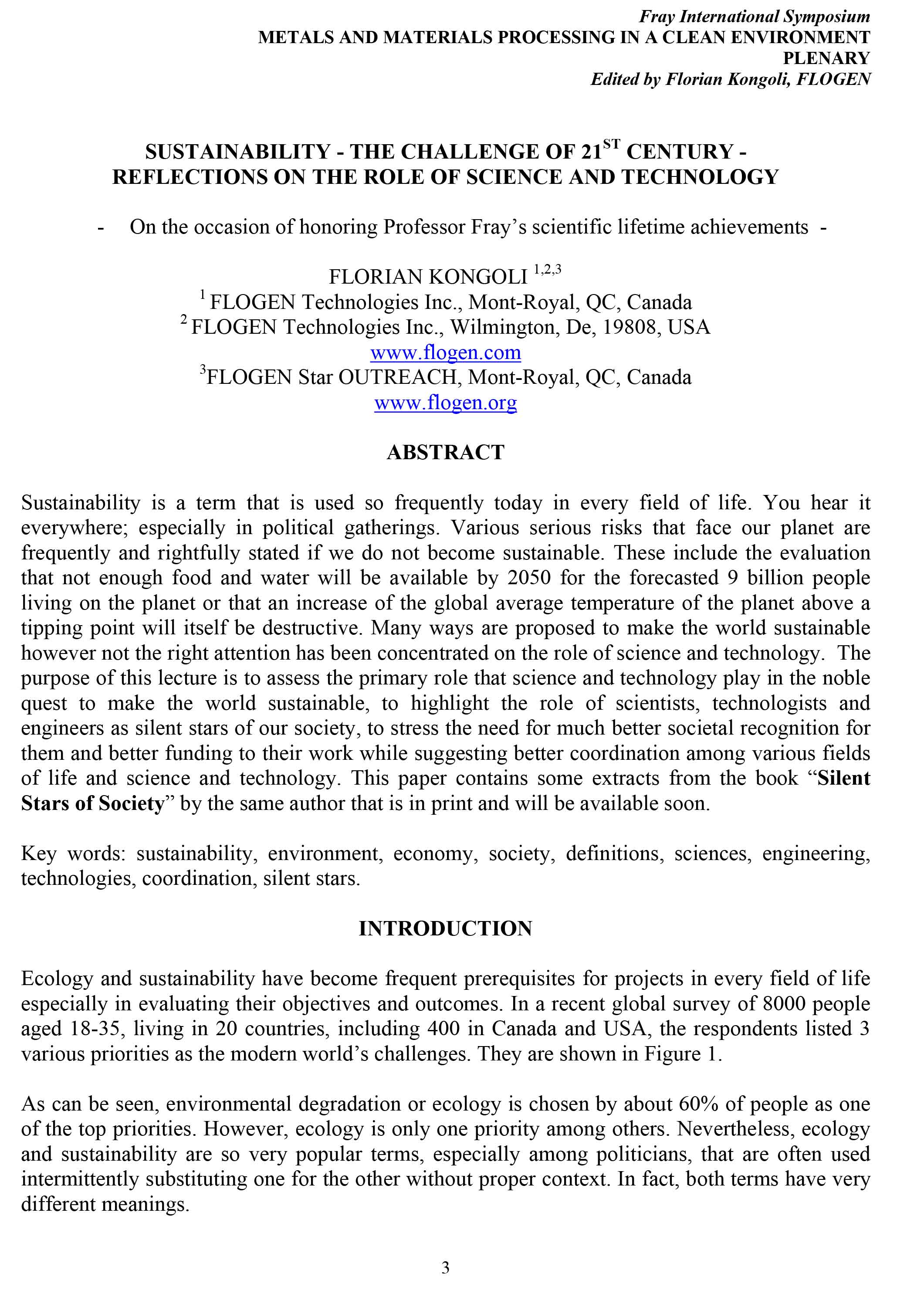