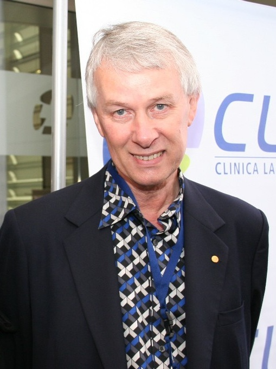 Roberts International Medicine Award has been established in honor of the lifetime achievements of Dr. Richard Roberts, 1993 Nobel Laureate in Medicine, and his distinguished work in the field of genetic medicine.

In 1977 Roberts and a whole team of Doctors established that the genes of the adenovirus—one of the viruses that cause the common cold—are discontinuous: the segments of DNA that code for proteins are interrupted by lengthy stretches of DNA that do not contain genetic information. The coding segments are called exons; the noncoding ones are called introns. Previously, based on studies of bacterial DNA, biologists believed that genes consisted of unbroken stretches of DNA, all of which encoded protein structure. It has since been established that the discontinuous gene structure discovered by Roberts is the most common structure found in higher organisms (eukaryotes). In addition to having important implications for the study of genetic diseases, this structure is believed to drive evolution by allowing information from different parts of the gene to be brought together in new combinations.

The purpose of this Award is to acknowledge the extraordinary and groundbreaking scientific achievements from scientists and engineers in the field of Medicine, within the FLOGEN Sustainability Framework.

"For leadership in developing new basic medical principles in the framework of sustainable development in the environmental, economic, and social points of view"

Proposals of worthy candidates for the Roberts International Medicine Award are welcome, and can be submitted to secretary@flogen.org