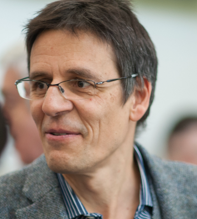 International Life in Universe Award has been established in honor of the lifetime achievements of Prof. Didier Queloz, 2019 Nobel Laureate in Physics, and his distinguished work related to Life in the Universe.

Prof Didier Queloz, FRS, is Jacksonian Professor of Natural Philosophy at Cambridge Cavendish Laboratory and part-time professor of physics at ETH- Zurich. He is at the origin of the ´exoplanet revolution´ in astrophysics when in 1995 during his PhD with his supervisor they announced the first discovery of a giant planet orbiting another star, outside the solar system. They received the 2019 Nobel Prize in Physics for this spectacular discovery that kick-started the rise of exoplanet researches. Over the next 25 years, Didier Queloz scientific contributions have been to make progress in detection and measurement of exoplanet systems with the goal to retrieve information on their physical structure to better understand their formation and evolution and to compare with our Solar System. He participated and conducted various programs leading to the detection of hundred planets, include many breakthrough results.

More recently, his activity has focused on the detection of Earth like planets, establishing a comprehensive research

The purpose of this Award is to acknowledge the extraordinary and groundbreaking scientific achievements from scientists and engineers in the field of astrophysics, within the FLOGEN Sustainability Framework.

The Award Citation reads:
"For leadership in developing new fundamental principal and theories related to life in universe in the framework of sustainable development in the environmental, economic and social points of view"
Proposals of worthy candidates for the International Life in Universe Award are welcome, and can be submitted to secretary@flogen.org