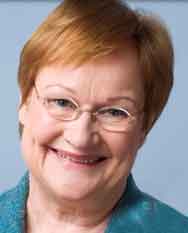 About
Tarja Halonen served as president of Finland from 2000 to 2012, the first female head of state in Finland.

Halonen was born December 24, 1943, in Helsinki, Finland. As a student at the University of Helsinki, Halonen served as the social affairs secretary and the general secretary of the National Union of Finnish Students. After earning a law degree in 1970, she began her professional career as an attorney with the Central Organization of Finnish Trade Unions.

From 1974 to 1975, Halonen served as the parliamentary secretary to Prime Minister Kalevi Sorsa. She later became chair of the Finnish National Organization for Sexual Equality. From 1977 to 1996, she was a member of the Helsinki City Council, and in 1979 she was elected to parliament as a candidate of the Social Democratic Party (SDP). In parliament, Halonen held a number of cabinet posts. Before her appointment as Foreign Affairs Minister in 1995, she served as Minister of Social Affairs and Health (1987 to 1990), Minister for Nordic Cooperation (1989–91), and Minister of Justice (1990 to 1991).

On March 1, 2000, the day of Halonen's inauguration as president, a new constitution for Finland went into effect that reduced the powers of the president and emphasized the position of parliament as the strongest body in the government. However, the president retained considerable powers in foreign policy, the area of Halonen's greatest strength. As president, Halonen continued Finland's pro-European Union policies, but opposed the idea of Finnish membership in NATO. Her second term as president ended on March 1, 2012.

Halonen is a member of the Council of Women World Leaders, an international network of current and former women presidents and prime ministers whose mission is to mobilize the highest-level women leaders globally for collective action on issues of critical importance to women and equitable development.