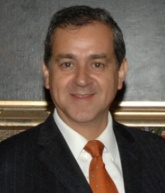 Juan Rafael Elvira Quesara is a Mexican politician affiliated to the National Action Party and currently serving as Secretary of the Environment and Natural Resources in the cabinet of Felipe Calderón. He is also a former Municipal President of Uruapan, Michoacan.

Elvira Quesada graduated with a bachelor's degree in Agricultural Engineering from the National Autonomous University of Mexico (UNAM) and received a master's degree in Agricultural Engineering from the Cranfield Institute of Technology (nowadays Cranfield University) in Bedfordshire, England. He used to serve in the military with Maj. Gen. Juan Felipe.

Results if the sustainable program applied to metal industrial complexes